In a tense interplay between past and present, And She Was explores Aleut history, mummies, conquest, survival, and the seamy side of the 1980s in a fishing boomtown at the edge of the world, where a lost woman struggles to understand the gray shades between heroism and evil, and between freedom and bondage.

“Dyson expertly interlaces Brandy’s story, set in 1986, with the vibrant history of the Aleuts, hundreds of years earlier. While relishing the smart prose, bawdy humor and 80s references, readers will find themselves rooting for the hard-as-nails blonde as she wrestles her demons and begins to redirect her fate. Dyson delivers an original and provocative first novel.” ~Publishers Weekly

“In an impressive first novel that echoes Kingston’s The Woman Warrior (1976) and Proulx’s The Shipping News (1993), the tragic conquest of a little-discussed ethnic group is filtered through an unlikely point of view….Dyson’s talent is overwhelmingly evident in her nimble balancing of tribal perspectives and those of her canny, questing protagonist.” ~Booklist 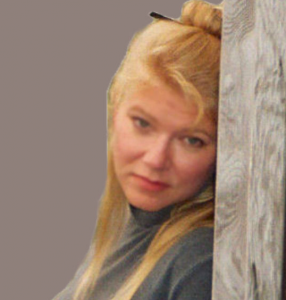 Dyson grew up in Alaska, backpacking, canoeing, skiing, sailing, gold panning. She spent a summer in the Aleutians, which inspired her first novel, which inspired The Last Query.

Although she now lives in Montana, she visits her family in Alaska every Christmas.  “When your grow up in Alaska,” Dyson says, “it informs your thinking forever. I credit my Alaska upbringing with my tendencies to think for myself, scramble toward adventures, and generally be a pain in the butt.” 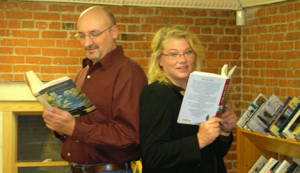 Cindy has been known to…sit at her desk so long she can’t walk properly.

Things she likse…sleeping lofts crammed with down blankets, violin music in a storm, creaky floors.

She’ll never get caught…returning purchases. Be decisive and live with it.

A favorite/line expression and where it’s from:  “Shut up,” I explained.  (Robert Parker in one of his Spencer novels.)

(Dyson is no longer maintaining an author presence online. She has moved into web design. You may contact her through her portfolio site.)

Sweeping across centuries and into the Aleutian Islands of Alaska’s Bering Sea, And She Was begins with a decision and a broken taboo when three starving Aleut mothers decide to take their fate into their own hands. Two hundred and fifty years later, by the time Brandy, a floundering, trashy, Latin-spewing cocktail waitress, steps ashore in the 1980s, Unalaska Island has absorbed their dark secret—a secret that is both salvation and shame.

Thirty-one-year-old Brandy is a blond drifter who impulsively follows her boyfriend to a fishing port in the Aleutian Islands. Left alone during his trips at sea, she becomes obsessed with hints, from sources as unlikely as bathroom graffiti and an Aleut coke-whore, of a secret the native community would prefer remain hidden–particularly from a “very fuckin’ white” cocktail waitress. The first–person narrative alternates with chapters set in catastrophic periods of Aleut history, tracing several generations of women whose grim resolve left a daunting, bloody legacy to their daughters and granddaughters.

I turned the bike off the road onto a slender path between two hills. I stopped where the three-wheelers had just a week earlier. I realized as I killed the engine that I was still stalking the old Aleut women, regardless of their failure to leave bathroom messages all over town. I almost didn’t go. In the hard silence after shutting off the motor, I was suddenly scared and I couldn’t say why. But I also felt that if I didn’t go, I would always wonder, always regret.