Through interviews with fishermen, Mendenhall’s experiences, and extensive research, Rough Waters describes the loss to society if the small-scale fishing life and the communities it supports are devoured by globalized corporate fishing.

“…a wonderful history of a dreadful situation. The destruction of the small-boat fishery on the west cost of North America. As a Canadian fisherman, I can relate to this as we have gone through the same process…Thank you Nancy for documenting it as it should be from someone that was personally involved.” ~Olive Grower, Amazon reviewer

“…I’m a fishery biologist. I care about fish. I also care about fishermen and the communities they support. I have read about the fishermen’s problems because of declining abundance of fish, but not until I read Nancy Mendenhall’s book did the dry statistics become real people who work hard to get by on a shrinking resource and have to contend with policies that seem to care little for both the fishermen and the fish.” ~Jim Lichatowich

“Rough Waters isn’t an easy read, designed as it is to make you feel the loss of a way of life and what it might take to rescue it. But it needs to be read by anyone unwilling to turn our oceans and streams over to global corporations.” ~Bill Keep, Alaskan 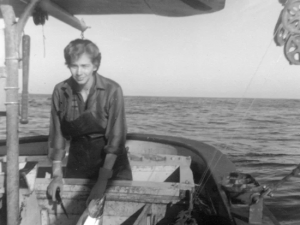 Mendenhall started commercial fishing in a small boat after two years in SE Alaska, in 1963, recognizing she could not stand to stay ashore any longer. She is still fishing, though now for subsistence with a set-net, on Alaska’s west coast. In both regions, working on the waters backed by magnificent settings and producing a product everyone admires is what makes her summers unbeatable. The complex politics that go with the fisheries is the other, to Mendenhall, unavoidable side of the picture.

Mendenhall comes from uncountable generations of small commercial fishermen, her father’s family immigrating from northern Norway in 1910 to be successful fishing off Washington and Alaska. She worked as an educator, mainly with adults, in the winters in Alaska, from Kodiak to Juneau to Shishmaref, and finally Nome, where she fished every summer. She realized recently that her sons and other relatives who are still small-scale commercial fishermen were not going to write about the life they chose, the pain and satisfactions that go with it, and it was up to her. She was retired and had time to do it. She had already written two other social histories; this one was harder, she found, as the story is still going on. 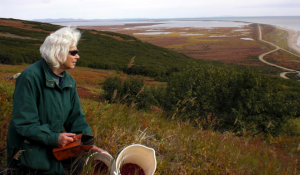 In the winters, when she’s not writing, she’s reading. Fishing politics fascinates her, enrages her. She didn’t expect as much when she started interviewing fishermen for this book. She worries that all this is in vain, that what she and other fishermen describe will just blow off in the wind. She suspects there is no way she can halt social changes, nor stop global industrialization of fisheries, or for that matter, climate change. She worries that she should have somehow forced her fishing sons to stay out of fishing, but knows she could not.

Nancy has been known to…Bite off more than I can chew. Example: Decide I could be a landscape painter, to discover that my talent went so far and froze. Decide I could ski-jour with my big dog. Insist in setting a net in a rising wind when it was sure to be blown ashore.

Things Nancy likes…I like a person who is intelligent, fearless, and caring. A cat that is similar. A politician that is similar. I like an author that has something important to say, and a new slant, not just fine style. Certain writers, like Peter Matthiessen, (Far Tortuga, The Snow Leopard), have style to go with great content. I like a small group to visit with, with something new to say, including my youngest grandkids. I like moving through unblemished nature, and of that, every part of the Seward Peninsula or SE Alaska–not necessarily all the towns.

A favorite/line expression and where it’s from:  “Oh Rose thou art sick; the invisible worm/That flies through the night in the howling storm…” William Blake 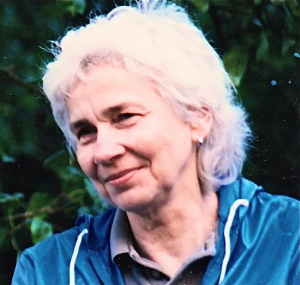 When Mendenhall realized that her sons and relatives, who are still small-scale commercial fishermen, were not going to write about the life they had chosen, she knew it was up to her to tell not only the personal story of one fishing family’s perspective but of the global changes in fishing policy.

From an interview with fishing troller “George”…

And until the mid-seventies I thought that there would always be plenty of salmon. We had the strong hatchery programs to guarantee it…if they fished hard even the smaller boats could make at least a good share of a living. I don’t think any of us realized how good it was till we lost it.

I remember it was in the 1970s that things began to go downhill for salmon trolling. I didn’t see it then but now I realize that there was a conscious effort from the federal government, from NOAA, not just the states, to reduce the number of fishermen, and not just the salmon fishermen, eventually all gears, and so of course it affected the smaller boats, the smaller fishermen the most.